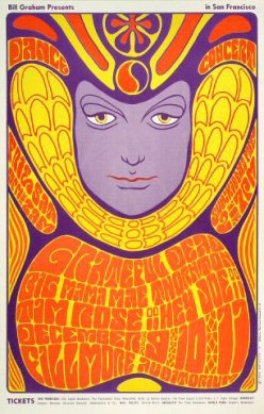 The gallery is thrilled to have acquired a major collection of counterculture rock posters from the late Sixties and early Seventies. The “Summer of Love” in 1967 ushered in a brief but spectacular poster craze centered around San Francisco, recalling the floral excesses of Art Nouveau, the pulsating after-images of Op-Art, and the bizarre juxtapositions of Surrealism. In style, it was the exact opposite of the rational and legible Swiss Style that took hold in the corporate communication around the globe at the same time.

Our acquisition features a nearly complete set of Fillmore West posters, where many of the great concerts of the era were staged by rock impresario Bill Graham (Grateful Dead, Santana, Jimi Hendrix, The Who, The Doors, Janis Joplin, etc).

In addition, there is a fine selection of Family Dog posters from the Avalon Ballroom in San Francisco, as well as most of the posters from Victor Moscoso’s kaleidoscopic “Neon Rose” series for the Marty Balin’s Matrix club.

Most of these are shockingly affordable and nearly all are in mint condition. Some of them are hand signed by the artist.

VIEW ALL OF OUR ROCK POSTERS HERE!