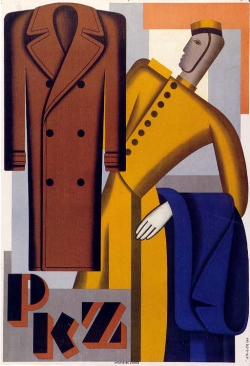 Herbert Matter’s poster of a bellhop admiring an overcoat is one of the rarest and most beautiful in PKZ‘s prestigious series. In its sophisticated Art Deco style, it shows the strong influence of Matter’s training in Paris with Cubists Fernand Leger and Amedee Ozenfant. Just 21 years old, Matter would stay in Paris to work with Cassandre on poster design and Le Corbusier on architectural projects. His return to Switzerland in 1932 marked a turning point for Swiss graphic design in its assimilation of Modernism.

For over 60 years the Zurich clothier PKZ teamed with the leading printer J.E. Wolfsenberger to produce Switzerland’s greatest poster series. Marked always by the richest textures and tones seen in lithography, the series featured all of the best Swiss poster artists, from Baumberger and Cardinaux to Matter, Birkhauser and Stoecklin. Given enormous artistic freedom, each artist was allowed to interpret the PKZ man or PKZ look as he saw fit.