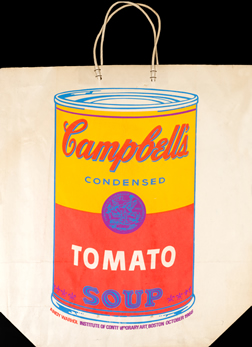 Andy Warhol’s Tomato Soup paper bag from his show at Boston’s Institute of Contemporary Art in 1966 is certainly one of the most sought after and expensive disposable carry-alls in the world, and also one of the most popular pieces on display in our Proto-Pop exhibit.

Warhol made his first soup can painting in 1962 which catapulted him and the Pop Art style to worldwide fame. The soup can became an icon of the new style, which used consumer items of all types to reveal (often ironically or subversively) the nature of the Post-Modern consumer society.

Warhol returned to the soup can repeatedly in his career, featuring the image in numerous works. Tomato soup, which was Campbell’s first flavor in 1897, was the artist’s preferred subject. In 1965, Warhol began to experiment with the colors of the can for the first time, which can be seen on the ICA bag.